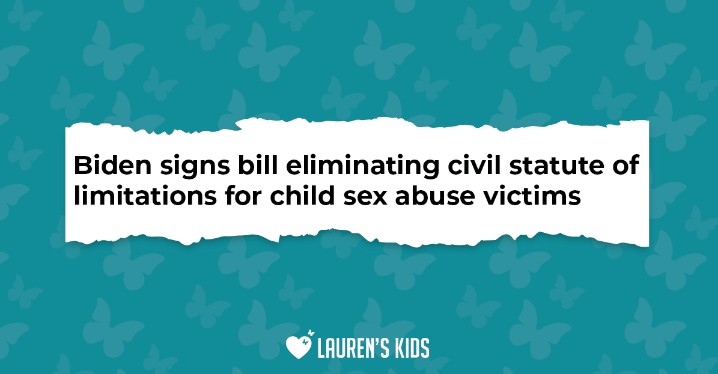 The statistics are startling. 1 in 3 girls and 1 in 5 boys are sexually abused before their eighteenth birthday and yet 30% of abuse is never reported. Childhood sexual abuse transcends every education level, socioeconomic status, and cultural and religious background. The good news? Our country recently took a giant step forward in allowing victims of child sexual abuse to seek justice no matter how much time has passed.

Until recently, the ability for victims and survivors of childhood sexual abuse across the country to sue in civil court was limited by a statute of limitations. A statute of limitations is the time period a victim has to file a claim before it is barred. While this may work in certain cases —like filing a claim with your insurance company, it is an archaic measure when required of victims of sexual assault. Many survivors, especially those who were abused as children, must first overcome enormous physical, emotional, and psychological trauma before deciding when, if, or how they can or want to come forward in a court of law. Limiting the timeframe survivors have to report and prosecute these intimate crimes only serves to sabotage healing and hinders the opportunity to seek justice. In many instances of child sexual abuse, statutes of limitations are get out of jail free cards for abusers. After all, there is no limitation on the suffering of survivors.

In September, the Biden- Harris Administrtaion stood up for the 42 million survivors of sexual abuse living in the U.S. by signing the Eliminating Limits to Justice for Child Sex Abuse Victims Act into law. This Act eliminates the federal statute of limitations for individuals who suffered sexual abuse as minors to file civil claims. Previously, minors who survived this abuse could file a lawsuit until they reached the age of 28 or 10 years after the abuse was discovered. The new law eliminates the limit on time victims have to bring a federal civil claim forward and creates a new avenue for victims who live in states with more restrictive statutes of limitations to seek justice.

In Florida, the statute of limitations bars most adult survivors of sexual abuse from filing a lawsuit after 7 years. While the reform does nothing for survivors who are now 28 or those who reported their abuse more than 10 years ago, it gives future survivors the freedom to choose when and how to seek their day in court.

Lauren’s Kids Founder and CEO, Lauren Book said, “This is a monumental step forward for victims’ rights and speaks volumes on the impact our advocacy can have in creating change. Child abuse victims are typically unaware they are even being exploited. Too often once survivors find their voice, statutes of limitations prevent them from taking legal action. This act honors victims and survivors by allowing them the time they need to heal before choosing to hold abusers accountable. Thank you to victims and survivors, advocates, and allies everywhere for using your voices to ensure survivors of childhood sexual abuse are heard. Together, our voices have power, and together our voices create change!”

We know when sexual abuse occurs, only 25% of child victims disclose within a year – 45% keep their abuse a secret for at least five years, many stay silent for decades, and some never tell. These numbers are telling- the process from “victim” to “survivor” is a personal one. The passing of this bipartisan legislation is a transformative step forward for victims’ rights and an encouraging reminder of the impact our voices have when we come together to create change.

Interested in joining our powerful army for change? Click here to sign up for our newsletter to learn about more ways to partner with us in our mission to end childhood sexual abuse through awareness and education.